Probably the most famous personality of the Spanish Civil War is Dolores Ibárruri Gomez.
She was born 125 years ago, on 9 December 1895 in the Basque Country.

Already as a young woman she joined the Spanish Socialist Workers’ Party (PSOE), and in 1921 she joined the Communist Party (PCE). Dolores Ibárruri was a famous speaker and editor of the party newspaper “Mundo Obrero”, where she used the pseudonym “La Pasionaria”. Despite political persecution, she was elected to the Spanish parliament, the “Cortes Generales”, in 1933 as a member of the Asturias Communist Party. In 1934 she participated in the World Congress of Women in Paris as chairwoman of the PCE’s Women’s Commission. 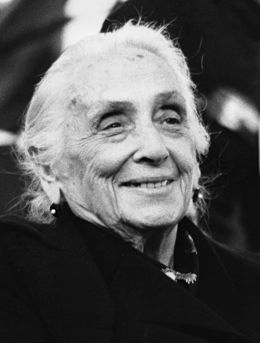 Dolores Ibárruri owes her great popularity to her role in the struggle to defend the Spanish Republic against Franco. She made flaming speeches on the radio and visited the troops at the front to boost their morale. In the fall of 1936, she mobilized all republican forces in defense of the Spanish capital. Her slogan “¡No pasarán!” became the battle cry of the defenders of the Republic and the International Brigades. Unforgotten is also her speech to the International Brigades when they had to leave Spain in September 1938.
Dolores Ibárruri herself had to go into exile in the Soviet Union a little later, where she worked as secretary general of the PCE, later as its chairwoman.
Only after Franco’s death did she return to Spain in 1977, at over 80 years of age. She once again became a member of parliament. She died in late 1989 at the age of 93. Until today, she enjoys high esteem in Spain, not only among the supporters of the Communists.

On the occasion of this year’s anniversary, her slogan “¡No pasarán!” takes on dramatic actuality. In early December it became known that almost 400 retired Spanish officers were calling for the overthrow of the left-wing coalition government.
In several letters to King Felipe VI, they called for action against the government, which, as the military claimed, was supported by friends of the Basque underground organization ETA and other “independentists,” and was destroying Spain’s national unity. Among the signatories are members of the Spanish secret service CNI. An ex-general wrote in the Whats App Group: “Prepare for battle! Let’s get the Reds!!! Cheer up and get ready for battle!” Opponents are the voters of the social democratic PSOE and the left-wing alliance Unidas Podemos, as well as feminists, homosexuals and advocates of Basque and Catalan independence.
In recent months, it has been increasingly observed that the agitation of the fascist party VOX is finding resonance in the army. In particular, the alleged threat to Spain’s “national unity” as well as the “danger” posed by the alleged “mass immigration” with the help of which the government wants to “destroy Spain”. At the same time they glorify the Franco dictatorship.

The public prosecutor’s office is now officially investigating. In order to protect the republic, however, all anti-fascists are called upon to actively oppose such coup attempts in the spirit of the legacy of “La Pasionaria”.