FIR supports activities for the International Day against Racism

Demonstrations and other events in several European countries, March 17, 2018

The UN’s International Day for the Elimination of Racial Discrimination was inaugurated in 1966 to commemorate the 1960 Sharpeville massacre, which saw 69 anti-apartheid protestors killed and 178 wounded for taking to the streets against the regime’s racist pass laws. In commemorating the massacre, the UN General Assembly called on all world states and organizations to participate in a program of action to combat racism and racial discrimination. 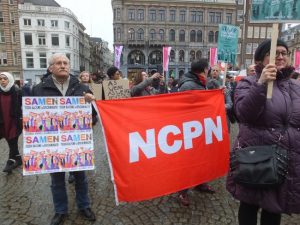 That is why anti-racist initiatives and member federations of FIR organized this year in several countries activities in the streets. Because today we are facing a massive rise in racism across the globe. Migrants and refugees are being scapegoated for the effects of austerity. The whipping up of anti-Muslim hysteria in the press has led to a dramatic rise in islamophobic attacks with visible Muslim women the primary target. Trump’s Muslim ban, his racist ‘wall’ project and equivocation over white supremacist and fascist marches have led to a climate of racism and fear across the US. Meanwhile in Europe, the rise of the Freedom Party in Austria, Front National in France, AfD in Germany, Jobbik in Hungary, the “Freedom and Direct democracy party” the DSSS party in Czech Republic and the recent nationalist demonstration in Poland are signs of a resurgence of the far right which requires a serious and coordinated effort to turn back. Racist hostility encouraged by right wing politicians and media towards Refugees and Roma is often turning into violence. Islamophobia and Antisemitism are on the rise across the continent.

The initiative “uprise against racism” formulated the slogan: 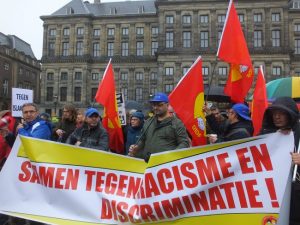 No to racist scapegoating of Minorities! No to Antisemitism and Islamophobia! Refugees Welcome!