In recent years, we have had to express our concern and dismay several times about acts of racist and anti-Semitic violence in different parts of the world, in New Zealand, in the United States, in France and in Germany.
Among these acts of racist and neo-fascist murder, one that stands out is the one that took place in Norway 10 years ago on July 22, 2011. Right-wing terrorist Anders Breivik murdered 77 people. Eight were killed in a bombing in downtown Oslo. Afterward, wearing the uniform of a police officer, he gained access to a summer camp of Norwegian Socialist Worker Youth on the island of Utøya and indiscriminately shot 69 youths and helpers. 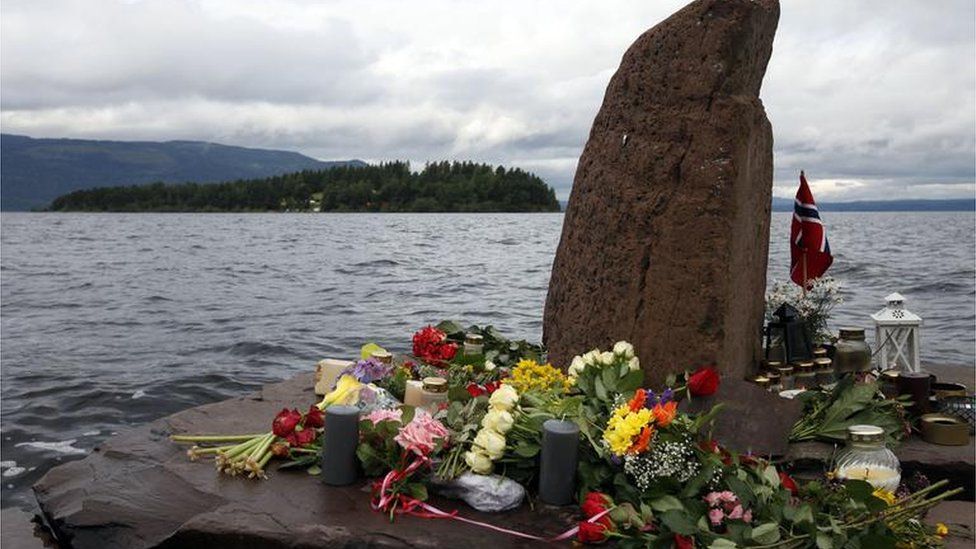 A memorial to the victims of the Utøya terrorist attacks in 2011. (Credit: PA / Getty)

As justification for his mass murder, the criminal stated that he had wanted to defend Norway against Islam and a “cultural Marxism.” His aim was also to eliminate the social democratic government of the time, which he held responsible for the immigration policy he rejected.
As a “vindication paper” before his crime, he distributed a 1500-page pamphlet entitled “2083: A European Declaration of Independence.” In this paper, it becomes clear that although the perpetrator prepared for these murderous acts alone, but he was ideologically and politically connected to the racist and neo-fascist movements, especially to their terrorist structures in the U.S. such as the “Stop Islamization of America” group. In a letter, he later expressed solidarity with the defendant in the trial of the NSU (“National Socialist Underground”) murders in Germany. He himself was sentenced in August 2012 to 21 years of preventive detention with a minimum term of ten years – the highest possible sentence in Norway at the time of the verdict.

What is particularly frightening about this crime is that in the years that followed, racist perpetrators of violence in other countries took the Norwegian murderer as their “model.” On the fifth anniversary of the attacks, July 22, 2016, in Munich, an 18-year-old murdered nine people after a longer period of preparation. In his later statements, he declared that he worshipped Breivik. The bomber at the two mosques in Christchurch, New Zealand, also referred to Breivik in his legitimization of the crime.
These examples prove: Right-wing terrorism, as it has manifested itself in various acts of murder over the past decades, is not the acts of “confused lone perpetrators.” Such murders and crimes are reflexes to an ideological and organizational networking of extreme right-wing structures, which lead to the fact that repeatedly individuals feel induced to enforce the “will of the people” violently or to stop the threat of an “Islamization” with murders.

The FIR calls on the occasion of this anniversary to pursue networks of right-wing terror more intensively and to commemorate its victims like all former victims of fascism. It must be a matter in all countries to fight the social influence of racist and neo-fascist violence and their ideological keyword givers together with state institutions and all anti-fascist forces of the civil society.