AMSTERDAM, 29 March, 2018 – The Dutch antifascists’ union AFVN-BvA has asked the German defence minister Ursula Von der Leyen to forbid any further Bundeswehr visits to the largest nazi and SS-graveyard in Holland, in Ysselsteyn (town of Venray), containing 31,000 nazi-graves of which about 6,000 for SS-men, among them former Dutch. 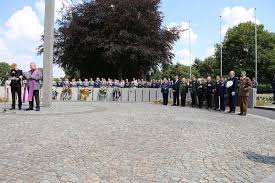 Photo above: the Bundeswehr-members at Ysselsteyn during their commemoration in July 2016

In surface, Ysselsteyn is the largest nazi-cemetery in Western Europa, surpassed by numbers only by a nazi-cemetary in Lommel (Belgium) that holds 35,000 nazi dead..

Today, the minister has just published new guidelines for the way the Bundeswehr should handle the past, especially the nazi-past after there were a number of neonazi-incidents last year involving Bundeswehr-soldiers..

A delegation of Bundeswehr men and women takes part in the four-day international walking event in Nimwegen called ‘Walk of the Wolrd’ or in Dutch ‘Vierdaagse’. During this period in July over the last years, the whole delegation always went to Ysselsteyn (town of Venray) in full military regalia to honour dead Wehrmacht and SS-men, laying flowers and saluting the dead.

The AFVN-BvA has also written an open letter to the president of the walking event, stressing that the delegation should no longer be allowed to take part because of their misconduct.

The antifascists ultimately want this graveyard to be closed to all of the public, but a local society is raising funds for a new visitors’ centre next to the graveyard, although according to the AFVN-BvA the numer of family members that visit this place has clearly dropped significantly over the last years.

The AFVN-BvA is a constituting member of the Fédération International des Résistants and cooperates with the German Bund von Antifascisten und Antifascistinnen.