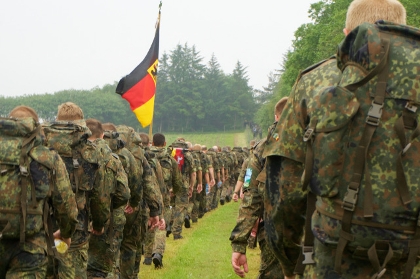 NIMWEGEN, THE NETHERLANDS, 20 June 2018 –  British, American and Canadian soldiers are planning to honour Nazi dead in Holland in July, alongside German soldiers. Dutch soldiers are also set to take part in a controversial event.

A Dutch association of former resistance fighters, the AFVN-BvA, says that these military will visit the large Nazi war cemetery of Ysselsteyn in Holland.This year though, to the protesters’ surprise, an unprecedented 600 men and women will take part, and this time from 11 countries. The soldiers do this while taking part in an international four day walking event in Nimwegen.

The AFVN-BvA says it has discovered these details through anonymous tips since last April they started protesting the visit of German soldiers to the cemetery in Holland. Initially, the protesters’ information contended that only Germans, a few Americans and some tens of Dutch military would take part.

Since nine years, the German and some other soldiers visit and honour the 31,000 Nazi and SS-dead in Nazi-cemetery of Ysselsteyn in the town of Venray, just 40 kms south of Nimwegen. They place honorific funeral wreaths and flowers there, and then salute the Nazi-dead, among whom the protesters claim to have identified ‘some hundreds of war criminals’.

Dutch soldiers also take part, as do some Americans. The Norwegian delegation to the marches has confirmed that their commanding officers will attend the visit to Ysselsteyn and lay flowers.

The soldiers do this during their participation in the yearly international four-day endurance marches in July in the nearby eastern Dutch medieval town of Nimwegen, just over the German border on the Rhine. This year marks the 102nd edition of this event, that receives a total of 48,000 walkers and usually turns the city into one week of carnival.

The organisers of the march confirmed to the protesters early in May that the soldiers are set to visit the Nazi cemetery again. Ysselsteyn is the largest war cemetery in the Netherlands, and the second largest Nazi-cemetery in Western-Europe, sitting just a few kilometers west of the German border. Neonazi’s have also been photographed there honouring the dead. 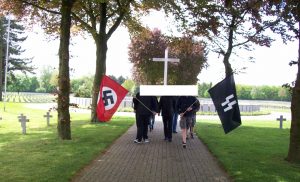 The Nimwegen marches – also known as ‘The Walk of the World’ – have a long tradition of welcoming army groups. This year, as in most recent years, 6,000 soldiers from ten countries will march along, among them 1,600 Dutch and about 400 from the German Bundeswehr.

In Ysselsteyn also lie some 5,000 SS-men, mostly Waffen-SS, officially assigned to regular warfare, but who committed countless war crimes. Among these are Dutch SS-men and Nazi-security officials and concentration camp guards.

An estimated 30 of these former guards lie here. Holland had three SS-camps during WW-II: Amersfoort, Vught, and the Jewish deportation camp of Westerbork, where most of the 104,000 murdered Dutch Jews including Anne Frank and her relatives passed through on the way to their deaths in the Holocaust.

Over the last years, irregular protests against honouring the Nazi-dead in Ysselsteyn have taken place. This year, five humanitarian associations have bonded together to prevent any more of such visits. Among these are a German association, ‘Vereinigung der Verfolgten des Naziregimes’ (VVN-BvA) in Berlin, and the international federation of resistance members, the FIR.

Dutch Jews have also protested, such as the vocal federation of Jewish Netherlands (FJN), and some survivors.

Last summer, a scandal developed about Neonazi-activities within the German army. The German minister of defence, Mrs. Ursula von der Leyen, ordered an investigation. In March she published new, restrictive guidelines for the way the German Bundeswehr should treat Nazi-related issues. Her general stance was that the Bundeswehr keep a safe distance from all things Nazi and to concentrate on their own history since it’s start in 1955.

But also interred in Ysselsteyn are ‘many hundreds’ of former Dutch SS-men, says Mr. Arthur Graaff, spokesman for the Dutch association of anti-fascist former resistance members, AFVN-BvA and organiser of the protests since 2014. His father and an uncle were resistance members, another uncle from the resistance was murdered in camp Dachau. ‘Those 25,000 Dutch SS-men automatically lost their citizenship by enlisting in an enemy army’, Graaff stresses. ‘They are considered very serious traitors by most Dutchmen and by Dutch law. For most descendants of war-victims even the thought of honouring them is especially repulsive.’

Graaff was featured in a recent documentary on Dutch national tv, that shows him protesting during the Nimwegen marches and together with a collegue removing a Bundeswehr wreath from Ysselsteyn to the nearby war grave of a mother and her five children, her youngest only one year old. 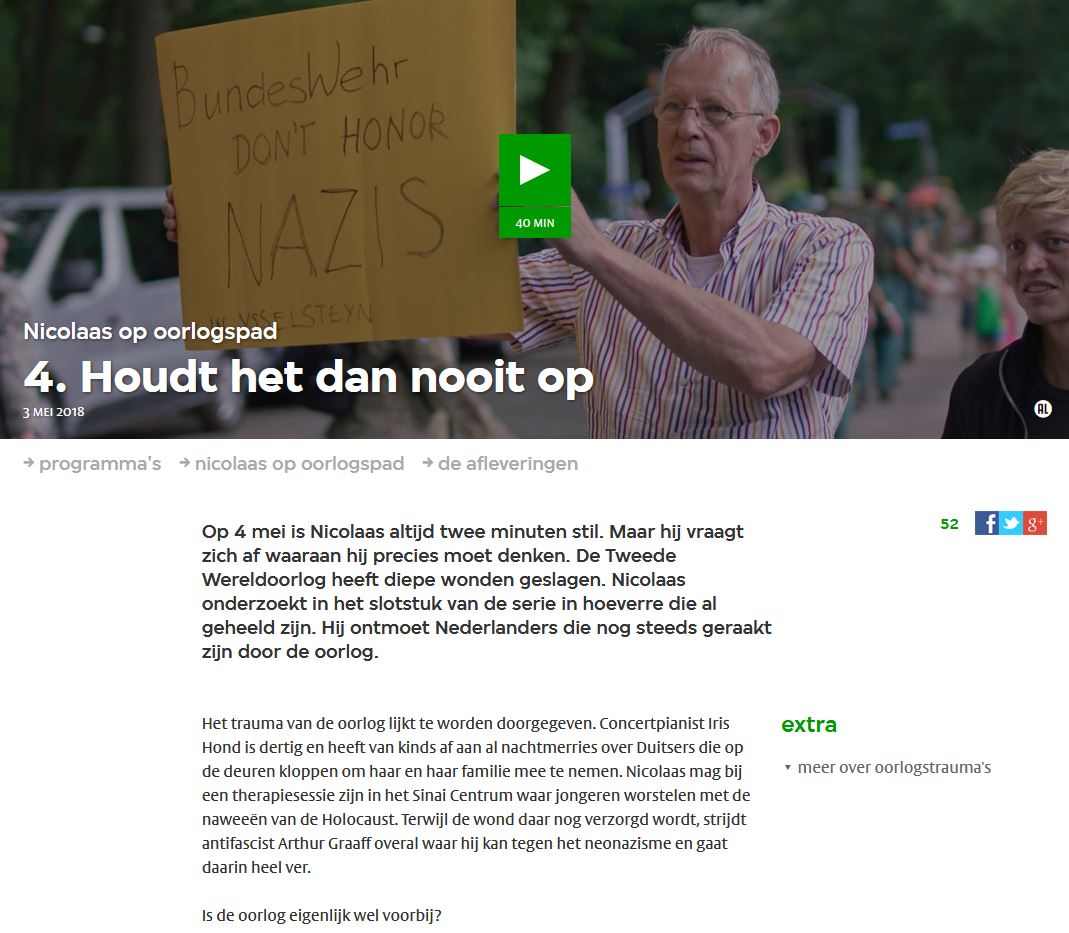 Also, numerous members of the Nazi security forces like the Sicherheitsdienst (SD) and the Gestapo, who terrorised, tortured and executed 20,000 Dutchmen and organised the Holocaust, have their graves here, as no Dutch local cemetery wanted to keep their remains in temporary local graves just after the war.

Graaff points to the fact that also a few hundred Dutch non-military collaborators, traitors and Jew-hunters are buried here. For instance Antonie van Dijk, the former Nazi-police commissioner of Nimwegen, who was instrumental in the deportation and death, in short the Holocaust of the Nimwegen Jewish community of 500 people. He was regularly present during these events.

It is also documented that Van Dijk made a habit of visiting the empty houses of the Jewish families just after their deportation, to rob their valuables for his own profit. He was shot by the resistance and died later in 1943. 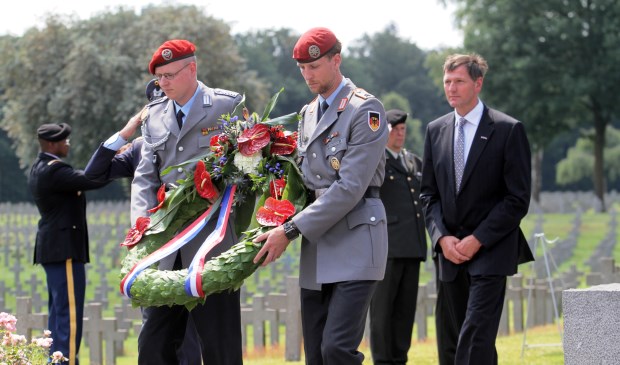 The protesters have presented their case to the Nimwegen town councillors last week. However, the council stated it cannot prevent the soldiers to visit other places in Holland. The soldiers nevertheless are guest of the town and are also accomodated and housed by the town.

Nimwegen suffered heavily during the war, as it lies near the German border. On February 22, 1944 the town was erroneously bombed by the Americans, which cost some 800 Nimwegians their lives, among them many children as a kindergarten was also hit.
During the fall and winter of that year, the town lay in the front line and suffered heavy war damages in relation to the failed Operation Market Garden, as well as many hundred of dead and wounded also as a result of mercyless and extreme actions of an SS-regiment, Frundsberg. Some of their dead also lie in Ysselsteyn.