Speak up now! Fighting fascism is not radical, it is necessary!

Every year, to commemorate the “Kristallnacht” pogrom of 1938, UNITED coordinates the International Day Against Fascism and Antisemitism on 9 November.

As UNITED, we are calling on civil society, community organisations, schools, local municipalities – and you – to join forces and confront hate with direct action under the slogan ‘Speak up now! Fighting fascism is not radical, it is necessary!’

Fascism did not cease to exist after 8th May 1945. Today, racist, fascist and Neo-Nazi movements are on the rise all over Europe. Neo-Nazis hunt and assault migrants, Muslims, Jews, LGBTQ-activists and other minorities, using rallies as a cover-up for their hate crimes.  It is fearful that the inhumane actions of the fascist regime(s) in the first half of the 20th century could be repeated. We MUST fight now for this to never happen again.

Join our campaign, organise actions and speak up against fascism, racism, sexism and hate based on a religious belief! 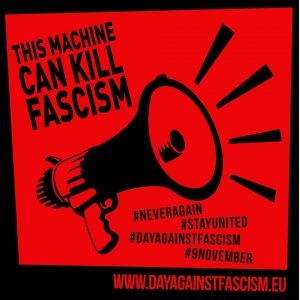 Start planning your activities
9 November is now only four weeks away, so if you haven’t already started planning your Day Against Fascism activities, now is the time! Your activity doesn’t need to be a huge national event – it can also be a small local gathering.

In the past, UNITED network organisations have coordinated a huge range of activities on this day. The types of activities you could organise include:


If you need some inspiration for your activity, you can always check the list of Best Practices on the Day Against Fascism website as well as other resources on how to organise activities on a budget, and how to organise last minute activities – check here.

If you organise an event, if you publish an article, a video, pictures or posters relating to this day,

please send an email to us to 9november@unitedagainstracism.org and we will share it on our campaign Facebook and website. In this way you will contribute to the creation of a strong and diverse European-wide message against fascism, and hate.

Don’t forget: Even small acts can change the world!

LIKE! – facebook.com/UNITEDDayAgainstFascism and follow the campaign.
JOIN! – organise a simple local or online event to mark the  International Day Against Fascism and Antisemitism
INFORM! – us about your activity
TWEET! – about your activity with #SpeakupNow #FightFascism #9November #DayAgainstFascism #DayAgainstAntisemitism
INVOLVE! – your city government in our Cities campaign

For further information contact:
UNITED for Intercultural Action
The campaign is coordinated by ‘UNITED for Intercultural Action’ – the pan-European network against nationalism, racism, fascism and in support of migrants and refugees. Within the UNITED network more than 550 organisations from a wide variety of backgrounds, from 46 European countries, work together in common activities and projects.

====
UNITED is the pan-European network against nationalism, racism, fascism and in support of migrants and refugees, supported by more than 550 organisations from 48 European countries. How to join the network: see www.unitedagainstracism.org/supporters

—-
This campaign has been made possible with support of the Council of Europe (European Youth Foundation) and the Erasmus+ Programme of the European Union.

The information contained herein does not necessarily reflect the position nor the opinion of our sponsors. Sponsors are not to be held responsible for any use that may be made of it.

You have received this E-news because your organisation or institution is listed in the UNITED online database and/or Addressbook Against Racism; you have attended a UNITED event; have participated in a UNITED campaign; are a partner in the working fields above; and/or have expressed an interest in UNITED network’s issues.

If you don’t want to receive E-news anymore, you can unsubscribe at this link. If you would like to subscribe with a different e-mail address, please fill out the form on the UNITED website.