The member federations of FIR have been making great efforts for many years to ensure an honorable memory of the antifascist fighters and the liberation by the anti-Hitler coalition. Even when government agencies boycott such commemoration work, worthy events take place, as our Hungarian association MEASZ repeatedly shows.

On the occasion of the 73rd anniversary of the Red Army’s liberation of the city on 13 February 2018, MEASZ organized a wreath laying together with district administrations of the city of Budapest. Vilmos Hanti, Chairman of MEASZ and President of the FIR, spoke at the ceremony.

He criticized that the FIDESZ government was thinking of the Hungarian soldiers fighting alongside the Hitler-Wehrmacht against the Red Army, while we have every reason to remember the liberators of fascist barbarism. A delegation of the Slovak Association of Anti-Fascists and Veterans (SZPB) also took part in the celebration of the Martyrs’ Memorial. 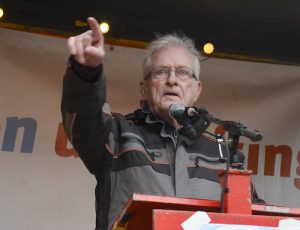 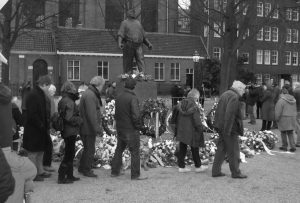 On 25 February 2018, the traditional commemoration of the Docker’s strike of 1941 took place in Amsterdam with the participation of older and younger anti-fascists. Together with FNV, the largest Dutch trade union federation, AfvN and other anti-fascist associations called to a public commemoration event. The focus was on the speech of the anti-fascist resistance fighter Max van den Berg, honored by the Michel Vanderborght Award, who was able to report on the strike and other forms of resistance as a contemporary witness. In addition, the international secretary of the FNV spoke on the role of trade unions. The joint call recalled the role of the illegal Communist Party of the Netherlands in organizing the strike and referred to the need today to recall these anti-fascist experiences of struggle.

At the end, the traditional defile and the wreath laying took place at the monument for the February strike.

URAP, the Union of the Resistants’ and Antifascists Portuguese, will honor on 10 March 2018 in Lisbon at the Alto de São João Cemetery, next to the Mausoleum of Tarrafalistas, the heroes of antifascist fight. Therefore, we do not forget what Fascism was, its methods and its crimes. To honor the women and men who fought for freedom and for a better Portugal is also a way of fighting so that in this country do not turn the black shadows that fascism launched in the history of the twentieth century.

These examples show how lively historical memory is in the member associations of the FIR.